A very nice article that contrasts myths and facts about plate armor. The bit that’s most interesting for BABD is of course point 3, the one about boobplate:

Now, I know the internet has been on the buzz with blog posts crying out at about how deadly Boob plate is, but how deadly is it really? Well, the main reason you would not want to wear boob plate is that the cleavage (if you didn’t know, cleavage refers specifically to the area of separation between each breast) acts as a ‘guide’ that would force a thrusting attack directly into your armored sternum. Now, likely this isn’t as lethal as the internet would like you to believe. Swords aren’t effective against plate armor- normally. Certain weapons like the edgeless Estoc and zweilhander are tailor made for thrusting and piercing into plate armor. Coincidentally these weapons existed at their peak in the 15th and 16th century – the period with the heaviest armored soldiers. But please remember, plate armor would not have lasted as long as it did if it was not effective.

Your average longsword though isn’t going to penetrate armor because it doesn’t just have to get through the plate. A plate wearing warrior starts dressing for battle by putting on his or her gambeson. This was a fairly heavy jacket commonly made with cotton and was somewhere around a half inch thick. With roughly 20-40 layers of cotton these were known to stop heavy arrows by themselves. They were in sense the middle ages ballistics vest. Then the warrior would don a mail shirt – and those of the highest quality would be as fluid as a silk shirt while also being impenetrable to a needle. These alone would stop sword cuts and small projectiles. THEN the warrior donned his plates that covered the underarmor. These alone can stop most sword thrusts and all sword blows. Combined these defenses would make it impossible to use a sword against a plate wearer if it wasn’t an estoc or zweilhander. Those only being successful due to their narrow blade that was designed to exploit the small gaps and unions between separate plates.

So then boob plate wouldn’t reallybe that fatal. It however certainly does not increase your chances of living and should be avoided just to reduce your chances of impalement. Another argument all these blog posts seem to be picking from the same source is that boob plate would break your sternum if you fell flat on it and accompanied with it is this picture: 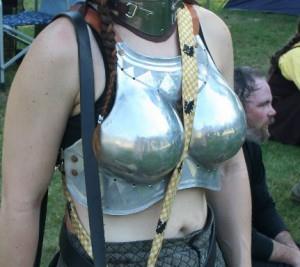 Ok, in this severe of a case without a gambeson or mail underneath and with a fairly large bust size that would break your sternum if you fell on it. But, boob plate is even common in the SCA and I have seen people fall flat on their faces – the bruises left by the weapons are far bigger than those left by armor. They were were however wearing a breastplate with shallow curves and clothing underneath – much like a woman in the middle ages would’ve. Note also that the SCA forbids armor with separated breast cups, meaning that any boob formed plates need to be formed directly into the breastplate.

So what’s the real reason armor shouldn’t have boob plates? Simply put it’s because we have zero historical examples of it, and it’s not for any of the reasons listed in the article. They are all modern theories made by modern minds with more knowledge of the internet than of armor. Think about it from the mind of a blacksmith. Or a bullet proof vest maker. Do we make bullet proof vest custom made for women? No, because a properly fitted bullet proof vest is comfortable to wear and it would be silly to make it anymore body hugging. The same holds true with armor. A custom tailored breastplate made for a women will be just as comfortable as if it were boob plate. There is absolutely no benefit in creating those awkward curves in the armor with primitive tools. It would’ve been extra work for no gain. Plus, a woman already looks much more androgynous after she’s put on her gambeson and mail coat. The defining characteristic of a female suit of armor is the torso…it’s often narrower and occasionally it will be “corseted” mimicking the hourglass shape of the woman that wore it. These examples of female armor though are extremely rare, in fact we only have a handful of surviving suits today that we can at best guess assume were tailored for women.

Thanks to tehkail for directing us at this post in their reblog.