Just so you don’t forget BABD exist, I’m preparing a very special post for the next week. 🙂

Keep an eye on the blog

Warhammer 4000 can be simply described as every adolescent male fantasy put into a blender and upgraded to the point of complete ridiculousness and unintentional parody. One case of latter can be found in Sisters Repentia.

Sisters of Battle. Army of Emperor-Worshipping warrior nuns in powered armors, that can kick as much asses as Space Marines, despite not having any superpowers.

There are many issues concerning treatment of Sisters by the creators, often way to willing to express their misogyny by having entire units of those fearless, competent soldiers slaughtered by personifications of testosterone-poisoned mind’s greatest dreams, that are Space Marines, for whatever bullshit reason writer did (or didn’t) made up. Or have single Space Marine destroy with one blow a monster hundreds of Sisters couldn’t stop. But, despite all that crap, Sisters are rarely presented in anything else than power armor. Sure, said power armor is heavy stylized and has all failing of boobplate, but overall Sisters are supposed to look badass first, and attractive later. For aesthetics presented everywhere else they don’t look so bad and much more sensible than warrior women from many other works of fiction. 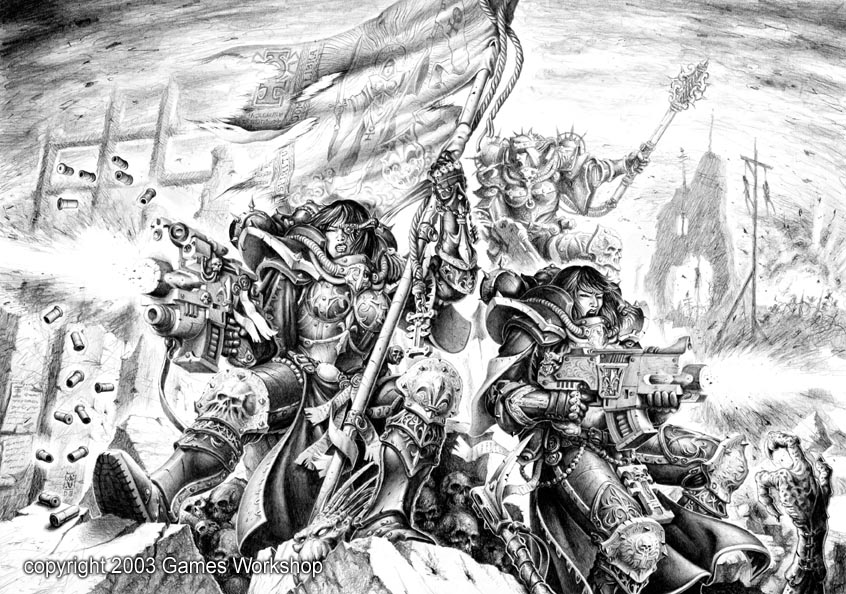 The thing is, they actually decided to have both. Let me introduce you to Sisters Repentia: 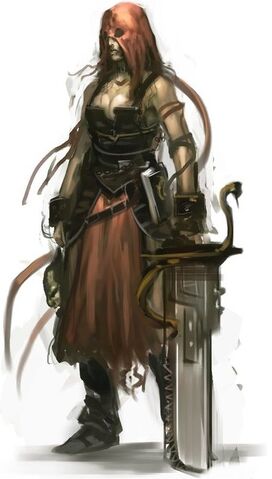 Who are those girls, you ask? Let’s have their wiki entry say it all:

The Sisters Repentia are fanatical, self-mutilating warriors who serve within the Orders Militant of the Adepta Sororitas. Having failed or fallen short of the strict religious codes expected to be followed by the Sisters of Battle sometime in their past, Repentia Sisters seek to earn the Emperor of Mankind’s grace once more through self-flagellation and finding a glorious death in the heat of battle. Though ultimately outcasts within their own Order, they are none the less revered by their fellow Sisters, who see them as pilgrims seeking the absolution of death and ultimate sacrifice in the name of the God-Emperor.

To put it simply, Sisters Repentia are the Sisters of Battle who somehow have fallen and now want to redeem themselves by glorious death in battlefield. One thing you can notice about them is lack of armor. In fact, they aren’t allowed to wear armor. I think the quick comparison between two sides of Sisters will show how much difference exist between two orders’ gears: 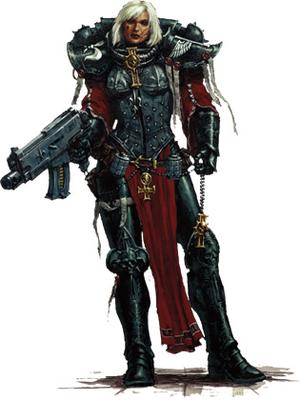 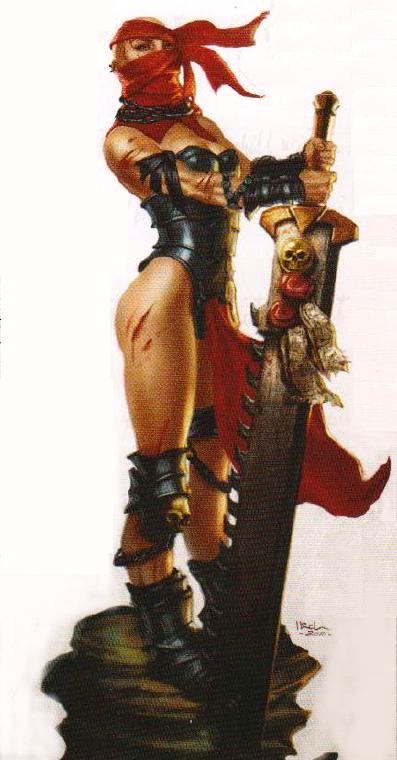 This is unintentionally the best satire on fantasy armor I can imagine. Sister Repentia go, no, charge, into the battle with things like this, almost stark naked in order to get killed. Their reason to wear an outfit that makes teenage boys feel strange in their pants? They want to die. Not retaining their movibility. Not retaining their agility. Not trying to be sneaky assassins striking from behind. Not any “They’re soo good they don’t need armor”. Not even “It’s magic, I don’t have to explain it”. They. Want. To. Die. They literally carry a death wish. Even empire that literally believes telling people to shoot Orcs with flashlights is a good idea thinks that fighting in such outfit equals suicide.

Sometimes a Sister Repentia can earn herself right to return to regular Sisters of Battle and get her armored pants and shirt back, but such cases are so rare each of them is worshiped as a legendary hero. And should be. Because if a girl is so badass she managed to survive not one, not two, but at least dozens of battles wearing something so stupid and inconvenient like this 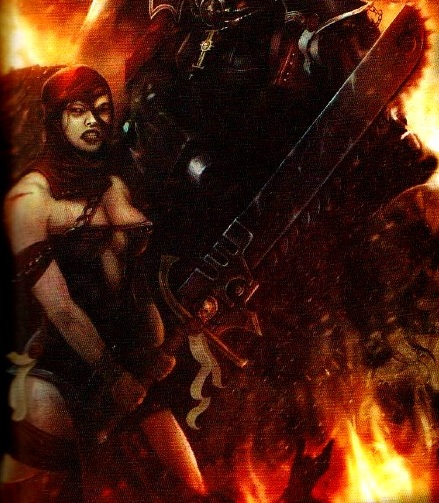 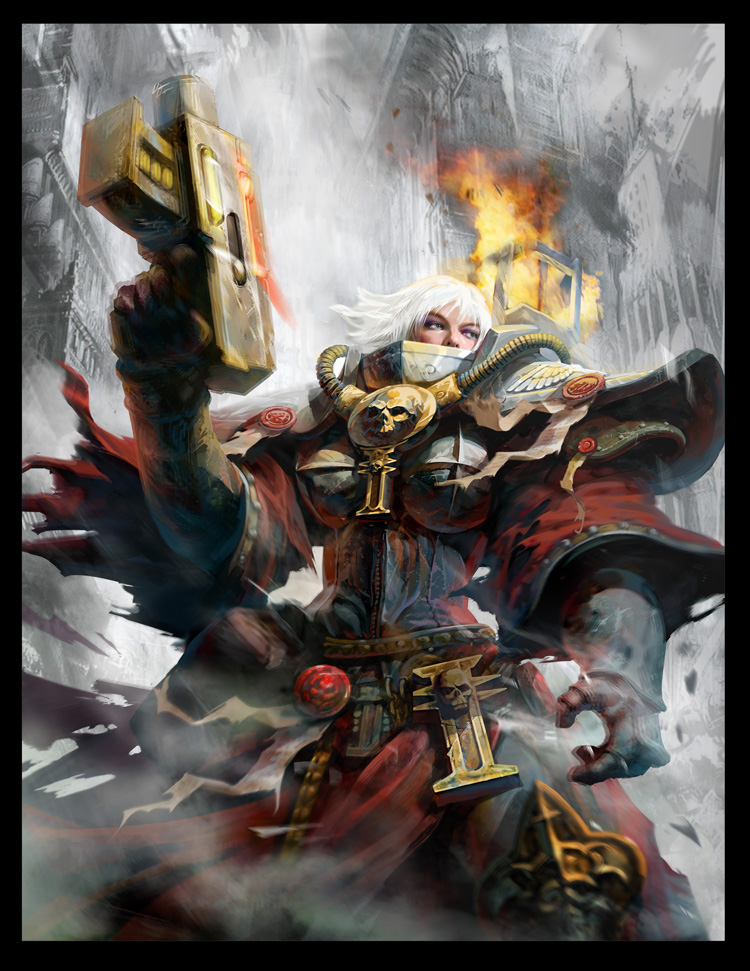 PS:I decided to add some pictures of actual game models. Game mechanics actually make the situation even funnier in a a meta way – while Sisters of Battle got several updates on the rules, Sisters Repentia still operates on outdated rulebook, effectively making them one of the worst units in the game. And really, why should Space Egyptian Terminators even notice army of naked women who will be shoot down before they manage to run half of the distance between them

while army of well-trained, armored soldiers is just greeting their mechanical foot troops with heavy artillery

Edit: Included credit to the submitter (it’s the oldest submission I have, one I got before started formatting parts by submitters as quotes). 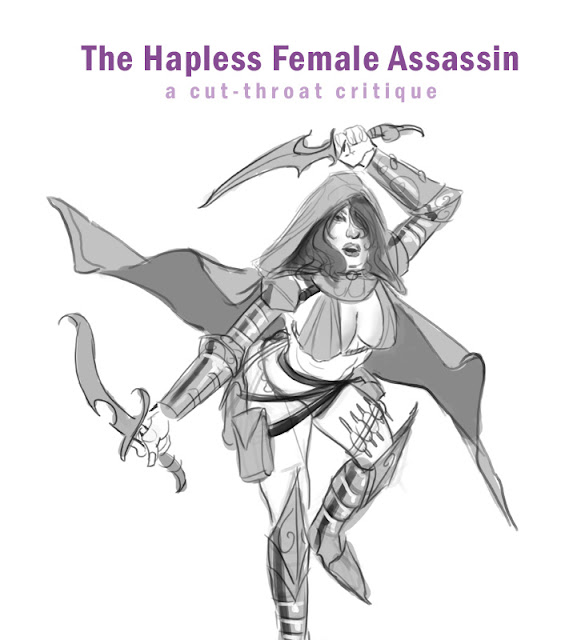 As I’m running out of reblog material and there were no user submissions so far, the project might look lifeless in short time.

If BABD tumblr goes on a hiatus, please don’t assume I abandoned it or that it’s dead. I’ll try to update it whenever possible.

The site was supposed to run on submissions and there are none for now. Even if I had time to make some by myself, they would still be just occasional, moreover, against basic purpose of this blog.

If you care about the initiative, please promote the blog to your friends and/or contribute with a post of your own.