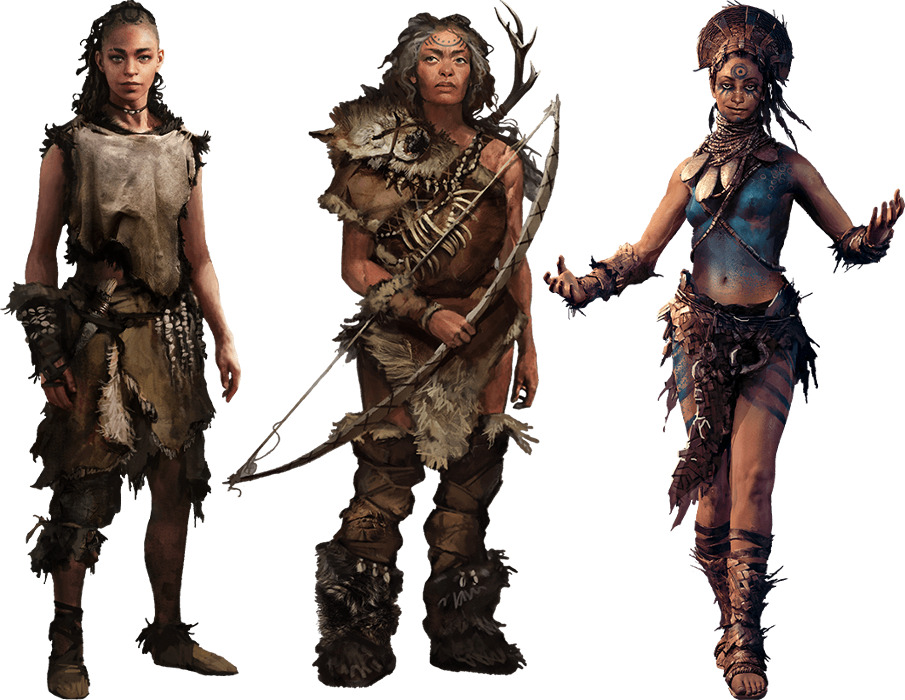 Hi! (o‿o)ﾉ I was wondering if I could get your thoughts on the designs of Sayla, Jayma and Batari from Far Cry Primal (set in Europe around 10,000BCE); Sayla (a gatherer) and Jayma (a hunter) are allies of the protag Takkar while Batari leads the Izila, one of the opposing tribes (Jayma has a high-res cosplay reference along with several other members of the cast).
Some of the other cast members: Tensay, Karoosh, Wogah

Far Cry Primal was about what I’ve come to expect from mainstream media producing a game set in the pre-Neolithic eras (basically the end of the hunter/gather dynamic’s dominance) – that is to say it was fairly well researched technically but came with a hefty dose of problematic politics at many levels.

Obviously since fur and plant fibre are biodegradable and it is literally a matter of several millennia – we don’t have much evidence of what kind of clothes people from this era wore.  In fact most of the debate over when the earliest clothes were made focuses on the species lice that were in them and the presence or absence of sewing tools.

So that said, the structure of the outfits for Sayla and Jayma are pretty good in that they have a practical purpose and don’t seem to make use of any sophisticated sewing techniques.  There’s also really no inherent problem with people in this era running around nude or near nude… the problem is how all these elements were fitted together.

There is, of course, the obvious issue with them once again dipping into the “evil is sexy” trope with the character who goes topless and is heavily decorated being the one who wants to conquer and burn all those from outside their tribe.

Combined with the other outfits and the overall story and characterization: the general modern day politics and problematic tropes start to become visible.

And of course, the eccentric shaman character is the one with the darkest skin tones and more African features. Oh dear.

And honestly, there was no reason for Batari to be a rarity for decorating herself, because while people of the era didn’t have jewellers or makeup companies they had access to flowers, ochres, and all manner of other things they could apply to themselves and their clothing as they pleased.

There was a lot of potential here and the art team certainly did the technical research, just it seems other priorities got involved.