A Quick Return to Heroes of Newerth

While Icy was working on her list of WIPs (some judgment, mostly from Icy herself), Ozzie trekked beyond the usual Heroes of Newerth gallery and found some officially posted concepts on Art Station. And they were all great, right? …. Right?

Looking at this set of character concepts I noticed certain… discrepancy between male and female-coded ones. It seems that the designs are pretty nice and geometrical, and work pretty well overall. Until a woman is being designed, where the priorities seemed to be cleavage and leg over a cohesive overall look.

I believe it was one of the technical difficulty/limited time streams (also the pics were relatively low-res), so I opted to do very simple, minimal changes – just by covering up this pink/teal Grim Reaper-y (?) lady’s bare skin and giving her wearable shoes.

Bonus for no more “eye” designs on her boobs. I kinda like the skirt I gave her. Not much to say beyond that.

Here’s a positive example from “The Dragon Prince” on Netflix! On the left is General Amaya (who is also deaf, v cool!), and on the right is Lieutentant Gren, her second-in-command (and sign language interpreter). This scene in particular is from s1e5, about four minutes in.

Took us too long to finally post this positive example. General Amaya is basically best character in the whole show: high-ranking soldier woman in great armor, reasonable authority figure, nonapologetic representation of disability and, last but not least, caring aunt for the main characters.

The designs used in Windscar’s advertisement are an absolute travesty. Like, I’m pretty sure she needs more than a chiropractor with her back bent like that

Wow, good find for BABD and for @eschergirls! The closest to this contorted promo pic I found from this game was this:

And generally WindScar seems to be very satisfied with looking like every other generically boobastic shit in our web ads tag.

What I find amusing about these designs is they are made by an Chinese company – but there’s almost no link to Chinese fashions, clothing, designs, etc.

These are basically Chinese artists looking at how Western artists have tried to imagine these costumes, then trying to make them kind of like the weird western fantasy designs they see in western video games.

Thus creating a cycle of terrible where some guy in a western company is now going to look at these and go try to outdo them….

We’re back! This week, we’ll be redesigning some sexy dudes. Don’t let the witches scare you off~ 😉

We’ll be starting at our regular time on Saturday at 10 AM PST / 7 PM CST.

Oh goddess yes! I’m sure you can buy this in a sex shop in Gotham.

What a great empowered outfit! And it shows so much of his brooding character; the bat-shaped cleavage window is clearly to show his internal struggle to maintain the image of Batman as he’s known, versus the Batman he wants to be (as opposed to if he just had the bat symbol sewn into the fabric, which would obviously denote he embodied that Batman ideal). And the cut-out above his butt is obviously a distraction tactic if any bad guy tries to attack from behind. 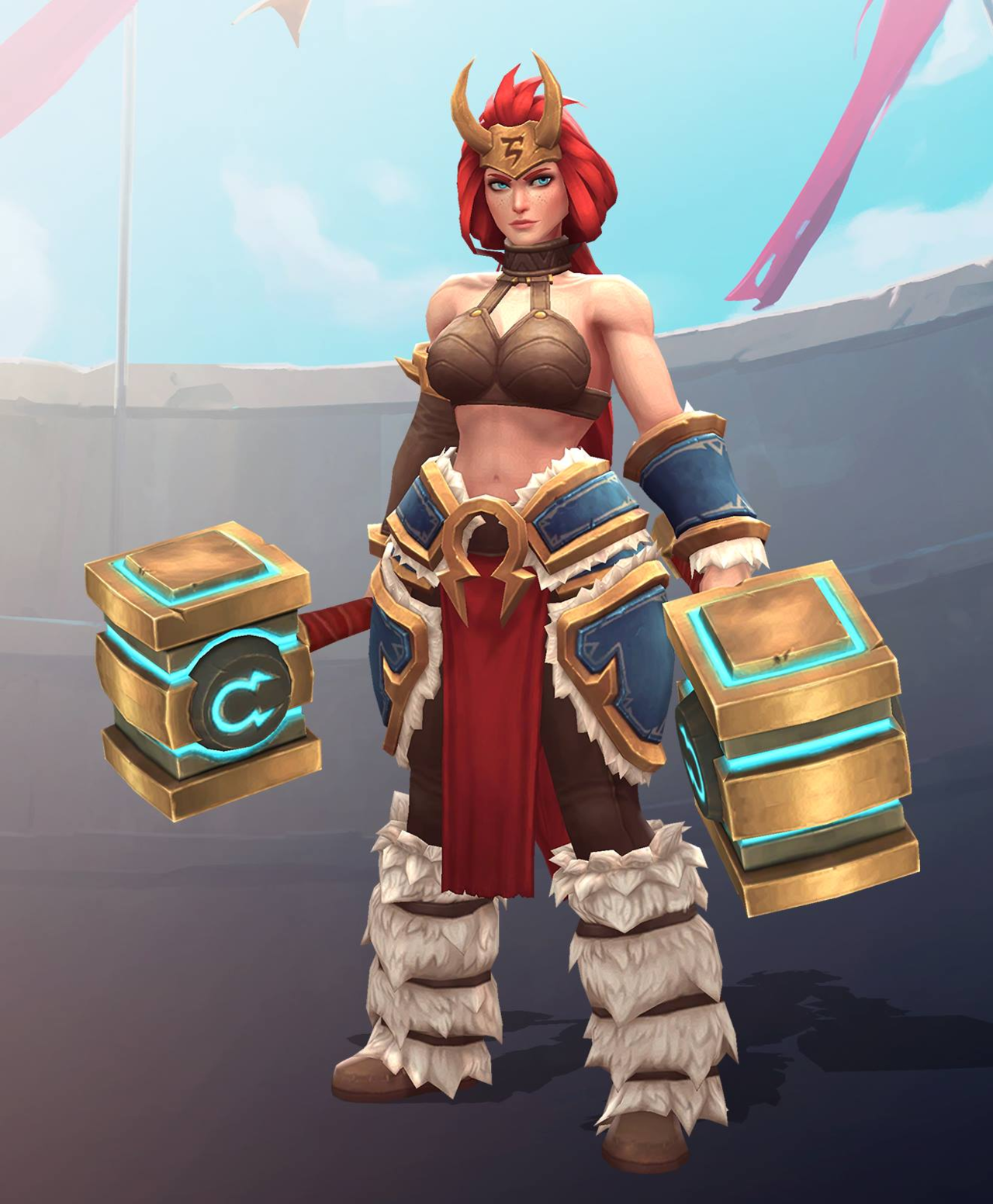 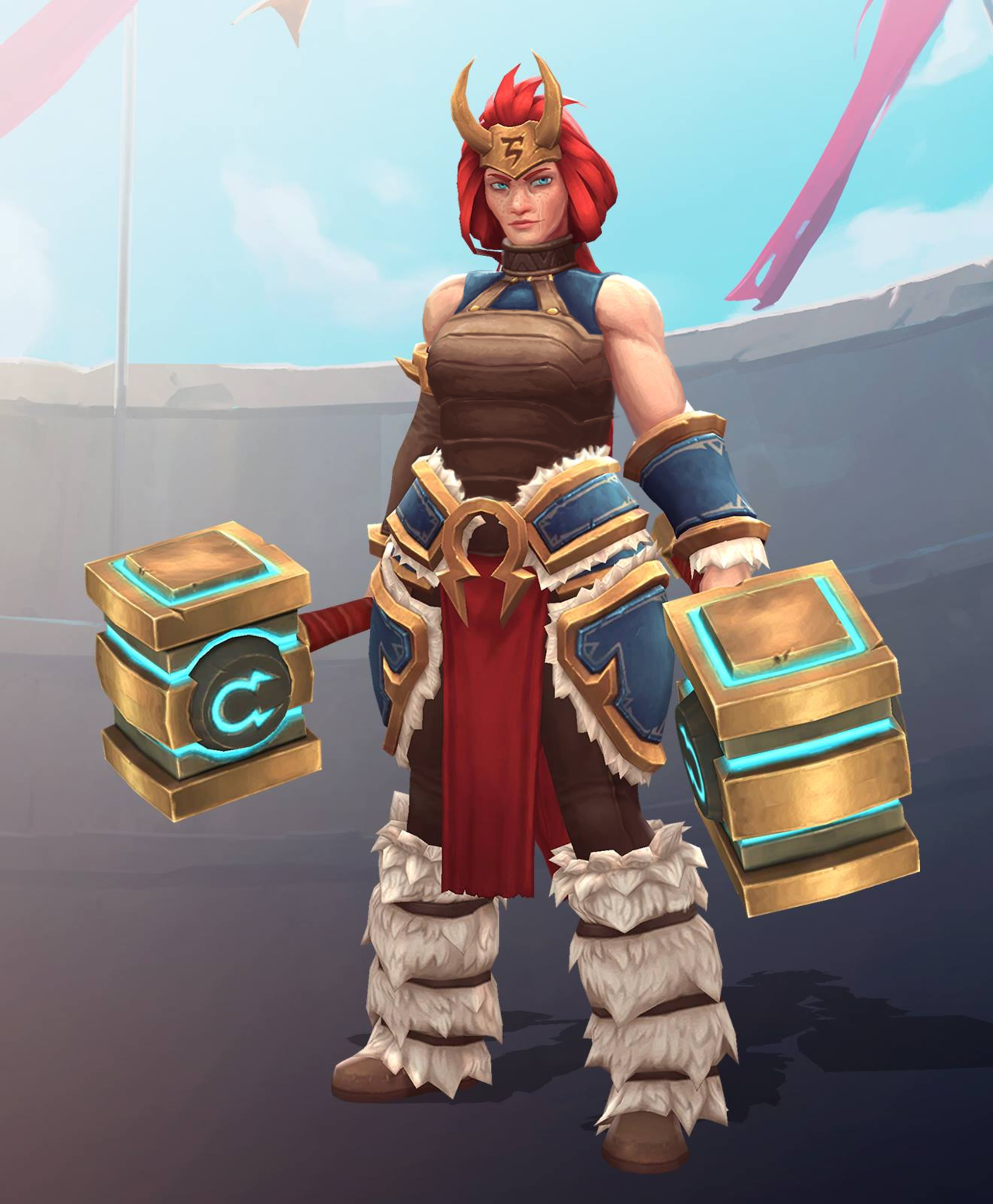 BattleWrong – We’re sure that Joke hasn’t been done before!

Battlerite’s a bit of a disappointment in its character design. They seem to have cool ideas (for the male characters and Iva), and their art style is cute and colorful… and yet. So why not try to fix some of their more uninspired designs?

To be honest, my desire to redesign Blossom was from my deep-seated frustration with animal-looking characters having a humanoid body shape. Why couldn’t she just be like Puss in Boots from the Shrek movies? Just a deer that stands on her back legs, without breasts and a skinny waist and hips. I realize that she’s a “faun” according to the wiki, which means human/animal hybrid, but the fact that she has both hair and fur on her head/face makes it look like they just slapped some tits on an upright deer. Maybe they were going for something new, but boy did it not work.

I tried to give her more clothes at first, but then decided…. screw it. She’s a deer now. Why does she wear clothes? So in the end, I just gave her a simple poncho. I did want to show off her deer-ness, so I left her shoulders uncovered and gave her upper body some fur, so it’s not weird that she has the same on her face.

I also changed her face to be less Generic Cute Girl.

After I finished the edits, we started making jokes about just Photoshopping a deer head on her instead, so I did that. Got some images of a deer and a birb off the internet, and so Blossom’s True Form came to be. (You can still see the lines from the stock image watermark.)

The result is fairly simple and could probably use some embroidery or patches of different-colored cloth, and some people might say this was an easy cop-out on my part. But I just want her to be a deer, not a deer with boobs; is that too much to ask for?

Thing about Freya’s original design is that I don’t actually find it overall bad – the random bikini top that looks like coconut shells strapped to a choker is the only thing that ruins it.
As mentioned back when we bingo’d her pre-update design (with even worse, sideboob-y bikini top!), she looks pretty great from waist down. Also, while far from unique, her face shape is allowed to be a tiny bit more angular… when viewed from certain angles, at least.

(basically it’s Zarya level of safe approach to diversity in female facial features – still conveniently attractive and wears makeup, but allowed to have square-ish jawline, given that you tilt your head and squint)

But since I couldn’t spend 2 hours of stream only painting her a decent top, I decided to build upon what’s there and add some more actually distinct features.

Of course, the boobplate had to go first. Since it bore some resemblance to Angela’s (coincidentally, also character associated with Norse mythology), I decided to base Freya’s new breastplate on my earlier Angela redesign. Also a blue tank top matching her bracer and tassets, for minimal layering. Left her shoulders bare, just gave them a tiny bit more heft.

I approached tweaking her face to create a more believable character. No makeup (which, unfortunately made her blue eyes with orange eyebrows stand out less), more prominent freckles, bigger nose, more sunken cheeks… All to create an image of a warrior who’s more concerned with surviving battles than spending hours in front of the mirror.

I’m rather pleased with the subtle changes to this design and my painting technique in this piece. Hope you guys like it too.

PS: I didn’t know that while doing this redesign, but apparently some genius on Reddit, upon seeing slightly more boob coverage on Freya’s official updated design decided to “fix” her back to her original bikini. (╯°□°)╯︵ ┻━┻

My beef regarding female characters in an action series who use “seduction” as a means of getting things done can basically be summed up in three points.

The first is: seduction is not a valid strategy. Even if your femme fatale can count on the idea that the vast majority of her opponents are going to be specifically attracted to women, which, she… can’t, there’s no way she can guarantee that she’s everyone’s type, or that everyone will drop what they’re doing to ogle / assist a woman they’re attracted to. A tactic is not a useful tactic if it is rendered totally moot in the event of asexual people, those not attracted to women, happily married monogamous individuals, people who are just not really feelin’ the sexy right this second, anyone of particular ethical fiber, anyone of a cautious or calculating persuasion who thinks to be suspicious of one of the oldest tricks in the book when it comes to coercion, anyone who fights in a manner or environment that makes them unable to discern their opponent, anyone who’s difficult to distract in general, or anyone who fights fast and reflexively and will only realize their opponent is a pretty lady after they’ve thrown all their punches… and that’s not a complete list. Odds are good that the majority of situations any sort of actiony lady encounters are not situations she can seduce herself past.

Piece of interesting commentary from the creator of Medina, one of the last month’s positive examples.

The idea of female character using seduction as a tactic to disarm whoever she’s fighting is something we often touched upon in our distraction bonus tag, most extensively in this post by wincenworks. Assumption that sexualized appearance and/or behavior somehow will warrant advantage over every (cishet male) opponent is beyond ridiculous.

The closest similar example of strategy which shatters suspension of disbelief this spectacularly is “she’s so great at dodging that she doesn’t need actual armor in gladiatorial combat”. Both are tactics based solely on the idea that, despite all odds, failure is not an option. To have them make any sort of sense, even

you have to literally present a world populated exclusively by people literally too incompetent to live… plus your one overly competent, yet super objectified female character.

Back to the topic of seduction, though, femme fatale warrior is quite an insulting, gender-exclusionary trope. We’ve heard it used as an excuse for quite a few characters, especially ones that fall under “evil is sexy” category and one particular video game character who everyone assumes counts as a femme fatale because of vague black widow spider theme, one undercover assassination and impossibly deep cleavage. Even though she’s a sniper assassin who never uses her sexual wiles in combat.

So yeah, not only there’s a prevailing (and obviously wrong) idea of female sex appeal as a valid battle strategy, it is so ingrained in our culture’s collective consciousness that even characters not meant to use use it in combat are designed to look as if they do.

The above post is pretty long, but we should really highlight this part:

…if seduction is a useful combat advantage (which it isn’t), there is a glaring lack of male characters that use it.

We’ve said this before, but Agent 47 from the Hitman series still has all his suit buttons done even in the latest game. Why isn’t his default suit Fabio-esque, surely that would help him get close to his targets?

Probably because “distraction” is a shitty excuse to put lady characters in revealing outfits.