Apparently a lot of people are having… polite conversations [/sarcasm] about the tiddy booplate puppet being 100% okay because not only is this parody, but the design was the idea of her player/voice actress, who’s a woman of color and size (and known for raunchy sense of humor).

No-one’s here to judge how empowered (and/or hilarious) a performer feels about playing a character with giant breasts and bikini armor, but shielding an uninspired, sexist choice in a mainstream commercial project from criticism with female co-creator is insidious as fuck.

It’s just an iteration of the (Marginalized) Friend Argument.

We all know the “Bayonetta can’t be problematic, cause a woman designed her” rhetoric. And this situation gives me flashbacks to Samus prancing around Smash Bros in booty shorts “thanks to the determination of her female designer”.

Also, how does unironically regurgitating the decades-old “ladies in Dungeons and Dragons have their boobs spill out of battle lingerie” trope add anything to an officially licensed adult comedy series?
Wouldn’t making her topless be a bolder, more subversive choice and more in line with her barbarian class? Oh right, sex sells, but nipples don’t. That’s why you can only name your character after them. ?

Hey, Wizards of the Coast, why did you play Shanna’s joke so straight? Who is this supposed to appeal to and for what reason?

PS: Arie is a Dragonborn, 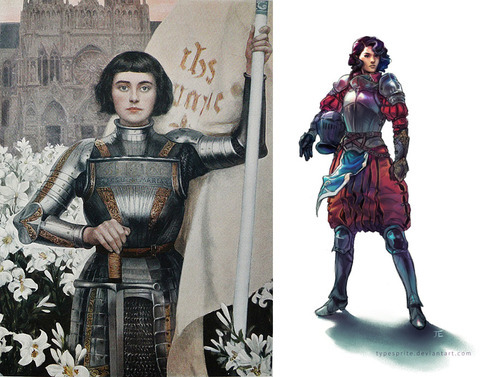 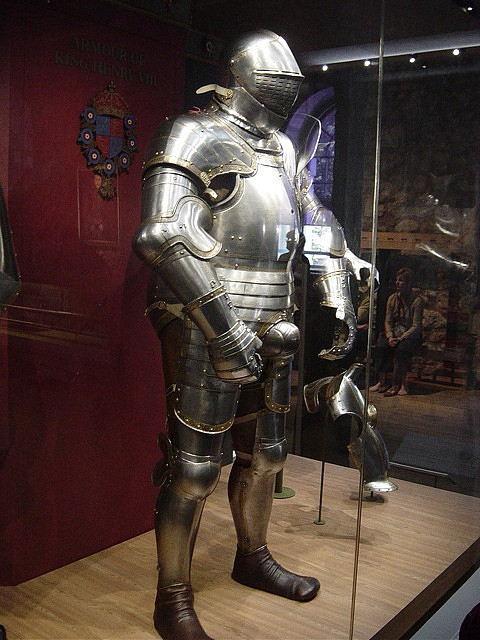 As requested by @oldmanskeleton – Boudica from Fate Grand Order.

I’ll be real with you here. This isn’t really an armor fix. There was nothing to work with here. This is a full on redesign. I based her more on the depictions of the historical person because she looked badass.

There was nothing to work with here indeed.

Fate’s absolutely abysmal treatment of Boudica, a warrior queen from Britain’s ancient history, is the logical conclusion of pushing the “Covers only nipples and genitals on the torso” bingo square to the extreme.
The blatant disregard of how clothes (and physics) work makes me wish she just wore two pasties and a c-string, which would be more honest and realistic skimpy costume than… whatever the fuck that thing on her boobs is supposed to be.

I really love what you did with this non-costume, @enecola! Kept the only even remotely interesting part, the poofy sleeves, and put her in an actual dress, while using the original… thing’s… color scheme. Was a simple frock really too hard of an idea for the creeps behind Fate franchise?

Literally the only thing even vaguely non-creepy about the original design is how she gains more (still very sexualized) clothes with level-ups, instead of losing them.

Though, from where she started, there was room only for (strictly technical) progress, I suppose.

Read about historic Queen Boudica on: Wikipedia | @rejectedprincesses​ site/blog | Take Back Halloween [content warning for mentions of sexual assault and violence in the descriptions]

Soul Calibur, as always, happy to disappoint with generic skimpy female outfits, this time for Sophitia’s sister, Cassandra Alexandra.
Sadly, not every character named Cassandra can be awesome and designed with attention to detail by the artists.

And in case you guys doubted whether this should even count as sexualized or if the cleavage is that bad, the reveal trailer leaves no doubt over what the boob emphasis is for [spoiler alert: it’s jiggling]:

Not an impressive bingo score, but she gets a sideboob count and half a point for those feeble tights as “no pants”. Sparing her from “high heels” count, as the shoes look relatively reasonable, comfortable even.

Reminder that this is what she looked like last time she showed up in the franchise, making the new design an “improvement” just over a tiny technical margin of covering a few square inches of skin more:

Since they already decided to give her a new ridiculous costume, why not go all out and consider butt armor, to match her signature butt attack?

As if that wasn’t enough, twin-bulged breastplates ignore the anatomical makeup of the female breast itself. To make a long story short, the breast largely consists of fat and modified sweat glands (for the production of milk, that is), and hence it’s not nearly as solid as a comparable mass of muscle. So all but the largest breasts can be bound quite flat against the woman’s chest without occasioning too much discomfort. In turn, this means a fighting woman probably isn’t going to need a breastplate with a chest profile larger than one worn by a fighting man of a similar height and general body shape, and therefore it’s quite likely that the woman would simply fit into the man’s breastplate with the aid of some padding to make up the slack in the waist and shoulders.

Why female breastplates don’t need breast-bulges
(The article was deleted since. You can read its mirror copy on archive.com here.)

Today’s throwback: Boobs 101 or that thing NO pop media artist seems to know about basic human anatomy, as illustrated in one of our recent reblogs. (Also cloth doesn’t work that way…)

If you actually know that and still decided that boobsocks or boobplate on a breasted character is a good idea, maybe consider it’s cause you wanna see The Tiddy? And then consider, where are all the codpieces that really existed that you could be drawing instead?

Hey you… yeah you, the one typing the comment about how a guy on YouTube told you the shape of armor is just an “aesthetic” and hence boobplates would be fine because “hardened steel is really hard”.

Don’t take advice from a guy who only assess armor based off what it feels like to swing one of his wooden swords and not on the distinct likelihood of the wearer being hit by a sharp stick wielded by a person on top of a one ton warhorse charging at full gallop.

That guy clearly doesn’t pay that much attention to what happens with re-enactors using heavier armor made with better steel.

if their boobs look like this in their clothes

I wish this wasn’t so disturbingly accurate…

And I mean it’s been public knowledge for years that Michelle Pfeiffer in Batman Returns was literally vacuum-sealed into her Catwoman suit and it still didn’t look even close to the ridiculous boobsock bodypaint technique that comic book and video game artists render superheroine costumes in.

And this shit gets a thousand times worse whenever the costume is not even supposed to made of latex, but regular-ass fabric… or metal ¯_( ͠° ͟ʖ ͠° )_/¯

PS: Not saying that male characters don’t get suspiciously tight supersuits or… T-shirts sometimes. But, we all know who’s mostly on the butt end of the problem and how feminine bodies tend to be framed compared to masculine bodies, even in comparably tight costumes.

In relation to an Overwatch League event two new exclusive skins were released, and one of them is an off-brand Camilla from Fire Emblem… I mean generic JRPG waifu… I mean Atlantic Mercy >_> CREATIVITY!

Unlike Camilla’s, her boobs might be all covered, but the shape and color contrast of the chest piece make sure that our attention goes to them first!

So, how is your “doing women better” going, Blizzard?

For those curious, here’s what the last season’s All-Star skins looked like:

Of course Tracer’s Atlantic costume wasn’t designed all around her tiddies (we know she’s all about that ass)… So, what’s that thong-resembling golden bar for, exactly? ( ͠° ͟ʖ ͡°)

And even then, the weird butt ornamentation wasn’t as egregious as the boobplate on wannabe Camilla…

Also, both the Pacific skins should prooobably reconsider the appropriation of vaguely native Pacific Islander imagery.

PS: I discourage looking up fanart of Atlantic Mercy without safe search on, at the very least not while in public.

PPS: A pic I found on a fan forum, very reminiscent of this parody we posted three years ago.

If your design cannot incorporate that underneath or including it, you’re probably fucking it up.

@bikiniarmorbattledamage I’m sure someone else probably tagged you in this already but hey. This sounds like a really good piece of advice !

Amazingly, no-one before sent this our way. Thank you for doing this, because this is an AMAZING rule of thumb!

Love how simple and on-point it is! PREACH

Bringing this back as a reminder that if more women were to design superhero costumes, we’d definitely get to see things actually referenced from athletic wear, including, but not limited to, sports bras.

A random game ad I found long ago… somewhere. I don’t really think this deserves any actual credit or research, considering this seems like a generic asset flip-type game web ad, including a cringy, vaguely sexual tagline!

The outfit, though, I think, justified doing a bingo. It’s basically a one big “don’t” in dos and don’ts of costume design.

She’s clearly a magic user, though, why would she need clothes that make any sort of sense or keep her warm? Maximal skin exposure, with complete disregard for functionality and physics, is all that matters!