Okay, see now what I don’t get is people who say they love Babs’ redesign because “finally a practical female costume in comics!!”

Because it’s absolutely true that impractical costumes are a problem that plague superheroines, but this is what Babs’ New 52 costume looked like before they redesigned it:

I’m purposefully using a picture that has her next to Batman – her costume was just as “practical” as his. Full body suit, sturdy-looking flat-heeled boots, no unnecessary details beyond the Bat symbol and cape (both of which Batman has too) – what exactly was so “impractical” about this?

For that matter, this is what Babs’ original Batgirl costume looked like:

That’s from the 1970’s, and her costume looks as practical as can be. Actually, I’d argue that Dick’s the one with the impractical costume, here.

So why are we acting like this is such a big deal that Babs “finally” has a practical costume?! She’s had one since practically the very beginning (once they stopped drawing her original costume with high heels, anyway).

Superheroine costumes are certainly lacking practicality on the whole, but Babs was never really an issue there. So giving her a practical redesign doesn’t really do anything to change the status quo – it just “fixes” what wasn’t broken to start with. Why not give Starfire a redesign where I don’t have to wonder how her top stays on, instead?

Also they made a huge deal about her new costume not being spandex, but I thought the whole batfam wore kevlar.

It’s not, it was never identified by name, but it’s apparently some sort of next gen bulletproof material, even BETTER than kevlar.

I don’t think anyone argued Barbara’s current costume was specifically one in a desperate need of redesign (let’s face it, she’s always been the one DC superheroine with consistently full body-covering suit: no cleavage, no 5-inch heels, not even bared midriff).

Her new costume is a breath of fresh air compared to the DC/Marvel female design STANDARDS, not compared to what she wore before.

But as far as the kevlar (or rather “batkevlar”) argument goes, it doesn’t really hold ground when the artist’s attempts at conveying her suit to be armor are so half-assed and inconsistent that the chest piece looks either painted on or too small to wear, let alone breathe in (see: middle images here).

We have a writeup on real-life kevlar armors queued  for sometime later, but, briefly, the point in this context is: you can’t just name it “batkevlar” and expect that no rules of reality should apply to how it looks and works.

Also, what Batgirl’s new outfit is praised for is how it’s not sexualized and how it actually resembles the materials it’s supposed to be made of, not how objectively good in combat those customized boutique clothes will be compared to Wayne Industry’s patented armor.

As for the practicality/protection issue in-story, the creators themselves addressed it best already: the only way she gets stabbed through leather jacket or trips on her laces is if they write her that way, and they won’t.

Does it make sense that after losing her old costume she assembles a new, cheap one, instead of asking Bruce to give her another armor? Yeah, probably not. Especially since she’s a regular human, not a superpowered alien or an Amazon or a magic user that can wear even a skimpy costume without caring for consequences.
But that’s the issue of pulling it off with writing, no different than pulling of the existence of miraculous better-than-kevlar material.

For what it’s supposed to be, the new costume is designed awesomely.

Since by now it’s confirmed that we are all trapped in Keanu fever, including his John Wick title – it’s probably a good time talk about super-fabrics like batkevlar and how they tend to be presented differently on men and women.  Above we have how it tends to be presented for women: an excuse to always have them in sexy spandex that is vacuum sealed for freshness.

In John Wick 2, the titular character stops to obtain an outfit made entirely out of a remarkably similar fabric – bulletproof beyond anything real technology can do but not enough to stop bruising damage from the impact.  How does his outfit look when he’s fully protected?

And yes, there are male characters who are known for wearing spandex type outfits, but you know what all of them get without a fuss?  Alternative costumes.

Batman has gone through more designs than one can count, the Snake family from Metal Gear get everything from standard BDUs to tuxedos, Sam Fisher’s gear was always tailored to be not too body clingy and got to do a whole game in civvies with a bullet vest.

My point is: If your fictional world is developing wonder technology to prevent battle damage – the first and foremost application of it should not be for women to wear body hugging outfits (that then get torn and don’t stop all the damage anyway) – but probably to augment existing combat outfits.

You should probably also consider the “rules” of it – and whether someone would prioritize showing off their body over not being covered in bruises all day every day – because bruises are not fun and you probably want your characters to display at least vaguely relate able judgement.  Let them get hurt but, don’t make it an hourly thing they could easily avoid.

Oh goddess yes! I’m sure you can buy this in a sex shop in Gotham.

What a great empowered outfit! And it shows so much of his brooding character; the bat-shaped cleavage window is clearly to show his internal struggle to maintain the image of Batman as he’s known, versus the Batman he wants to be (as opposed to if he just had the bat symbol sewn into the fabric, which would obviously denote he embodied that Batman ideal). And the cut-out above his butt is obviously a distraction tactic if any bad guy tries to attack from behind. 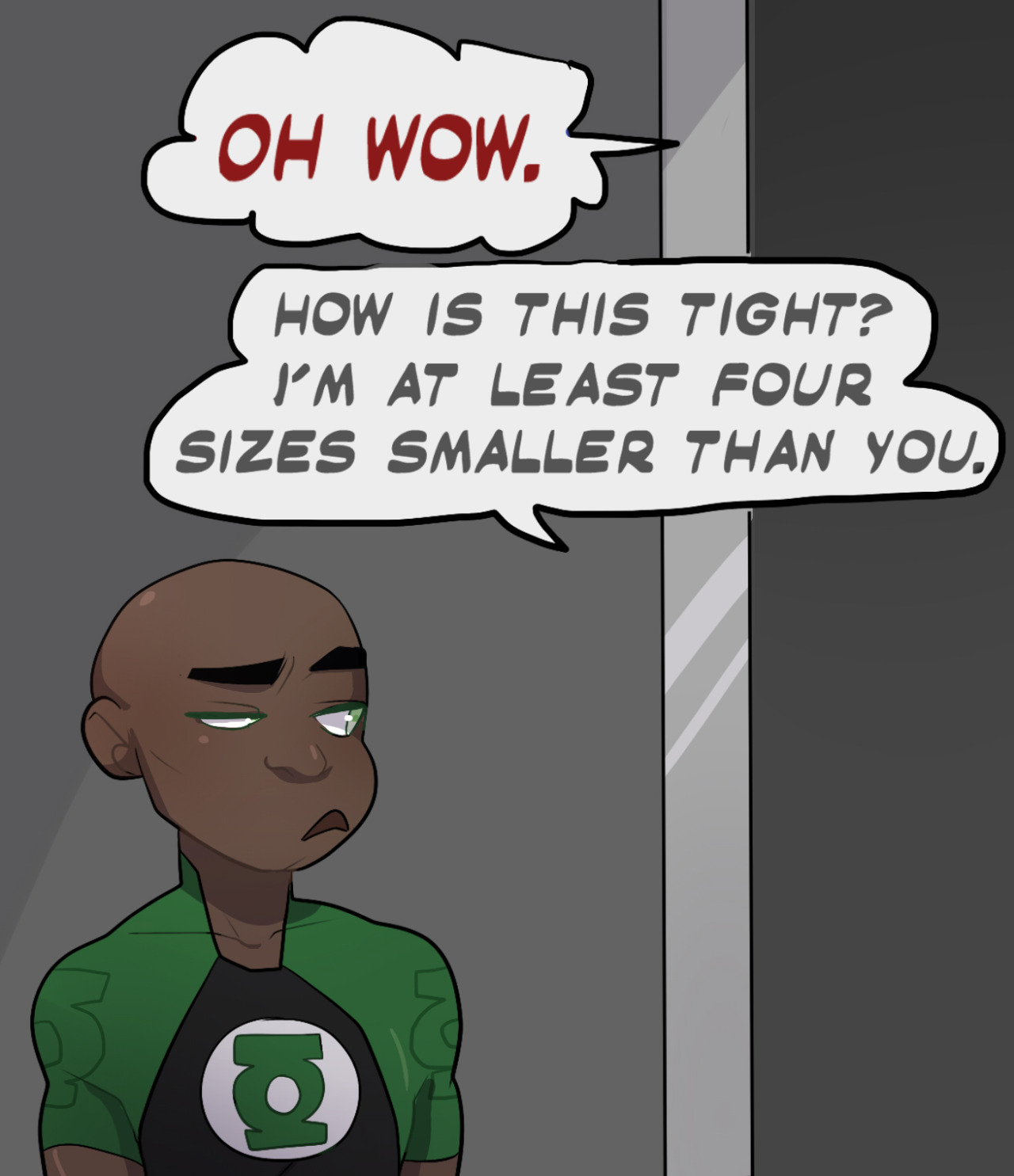 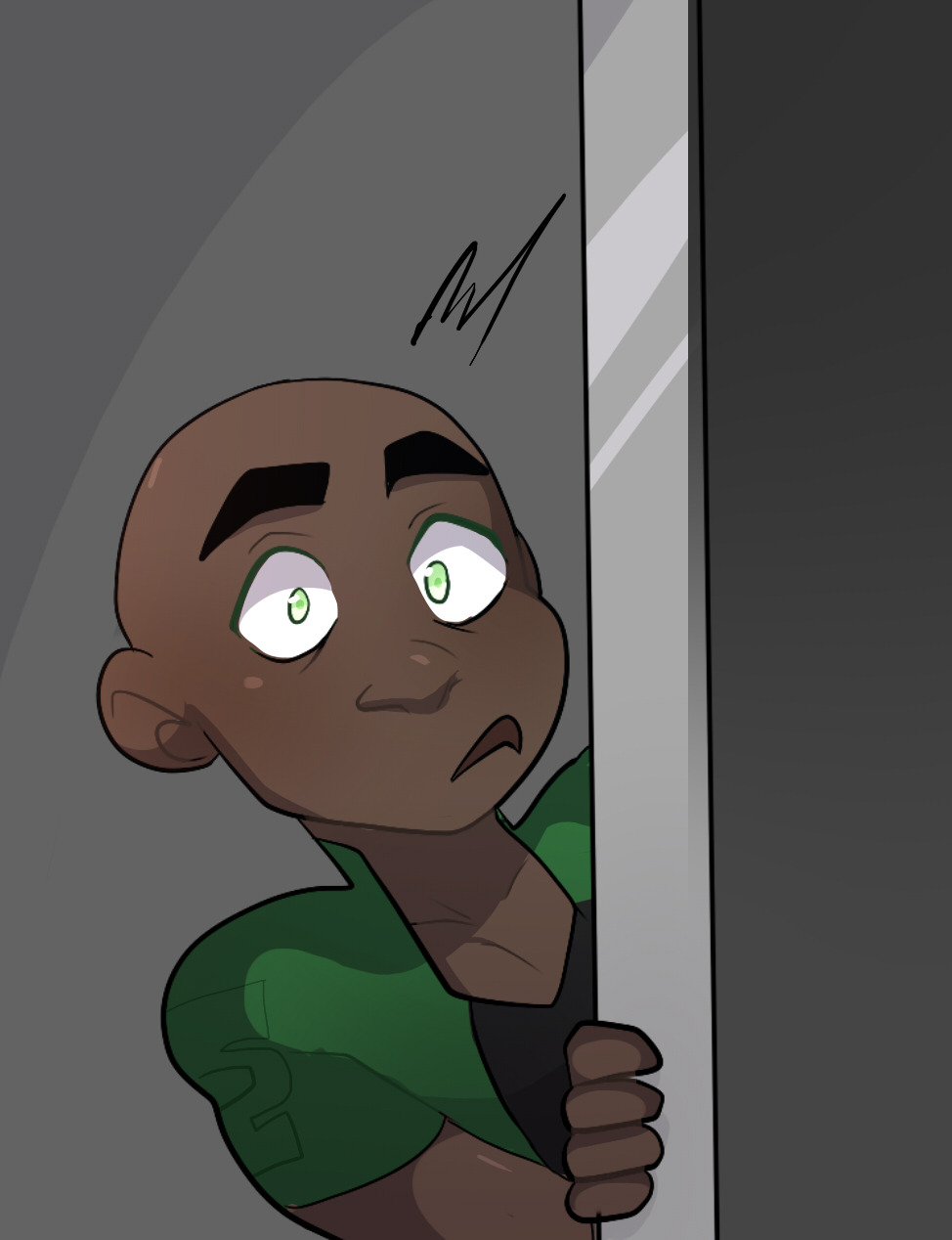 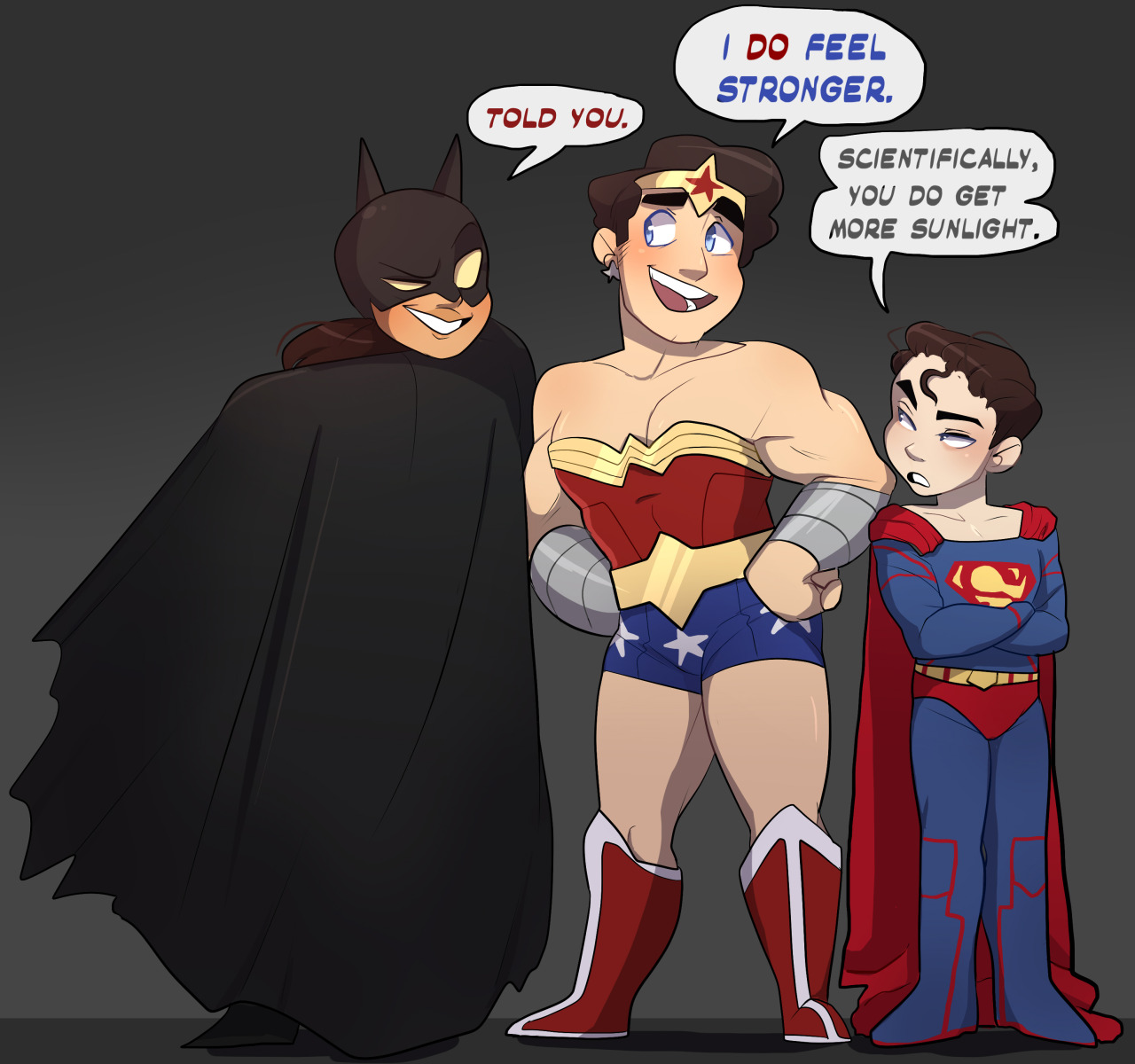 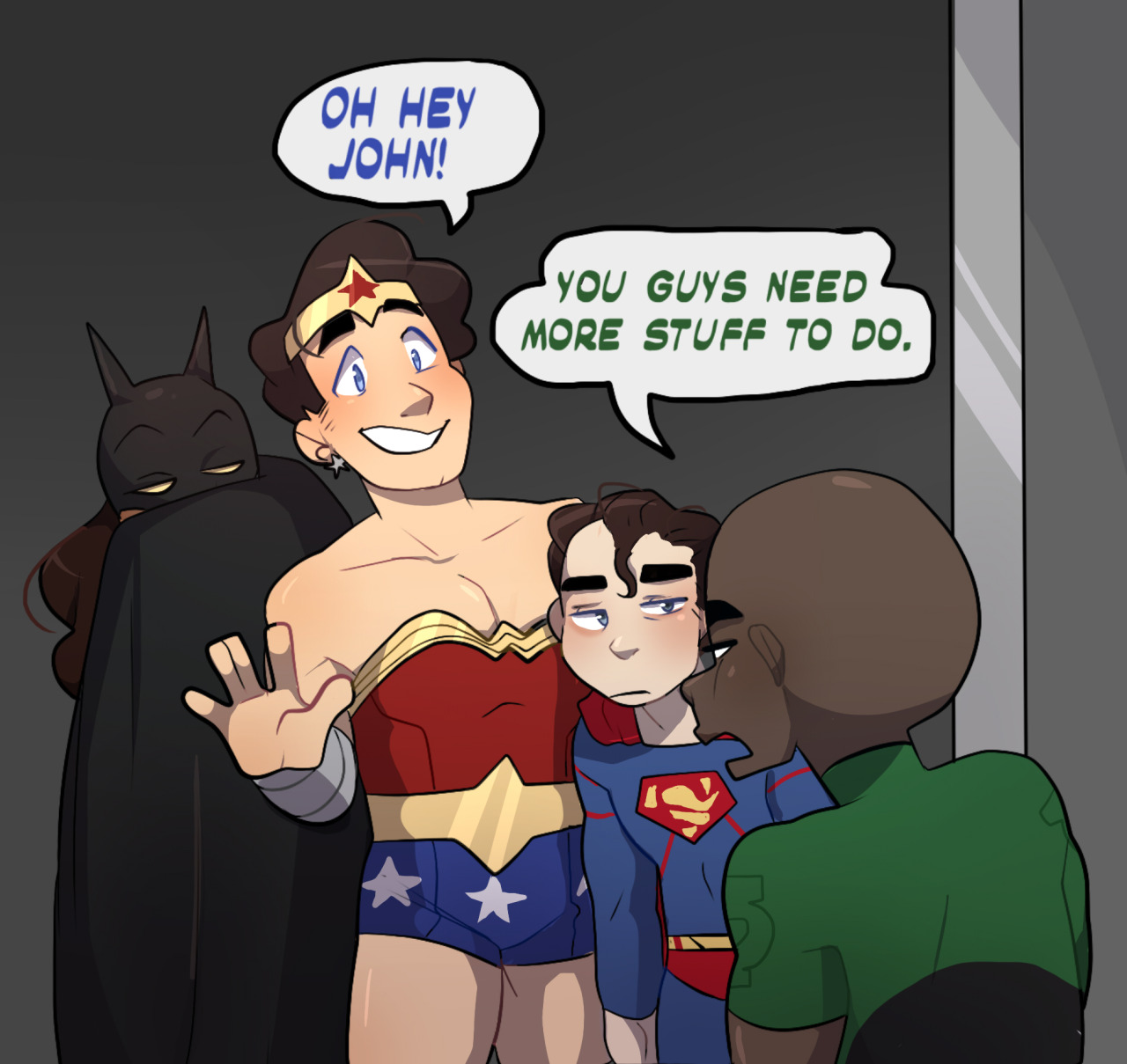 Bruce: It was for research.

Diana: I also really wanted to wear the cape.

Awww, this is as cute as funny! The Little League gives us yet another fine example of Superman exercising male empowerment (and better exposure to sunlight).

I think we can all agree that men of Justice League, no matter the incarnation, should borrow Wonder Woman’s fashion sense more often. For research, if anything 😉