Bloodborne board game – official art by

Can we all appreciate how entirely gender-neutral all of those costume designs are?

Perhaps one of the biggest keys to the success of Bloodborne and Dark Souls is the incredible focus they have on the goals of their games.

It really shows what you can accomplish.

And it really shows that ridiculous female armor is not something enhances fantasy horror or cosmic horror. 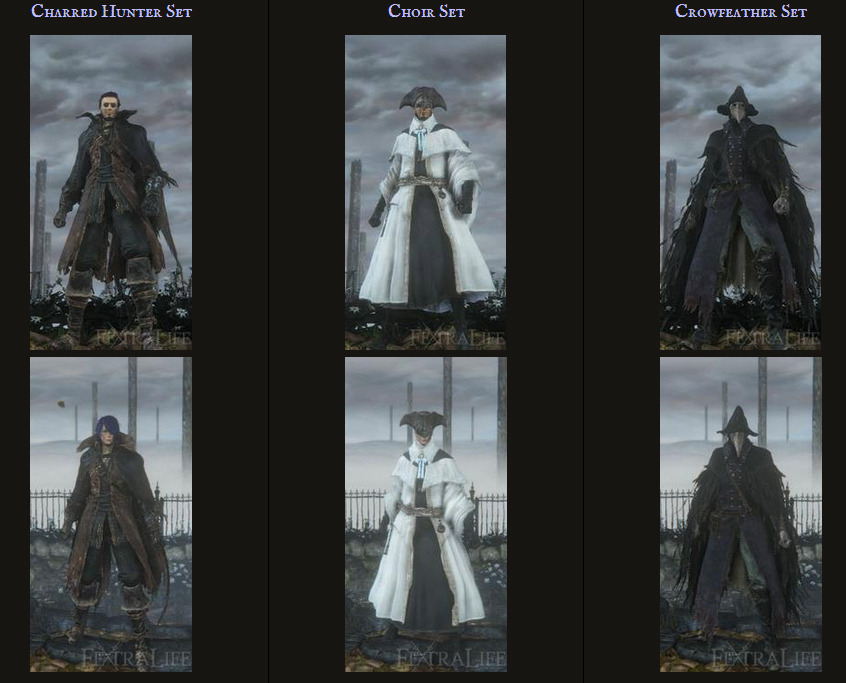 Called “attire” instead of armor, not only do they look very stylish, they perfectly encapsulate the game’s Victorian-era gothic horror setting. The in-universe justification for the lack of heavier armor is that metal is basically useless against the claws and teeth of the monstrosities that roam the streets; therefore, speed and maneuverability are generally given priority.

Note on how this doesn’t result in people fighting with attire that leaves their butt cheeks exposed.

There are only 3 exceptions to the “identical for men and women” rule that From Software usually follows: the Black Church set, the White Church set, and the Knight’s set, and even then…

…you can see that the women’s armor is completely non-sexualized (and in the Knight’s set case, I’d say, far more stylish).

It’s also worthy of note that you can put your male character in some great dresses too, if you want!

No negative comments from any npcs or anything, either (not that many of them notice what you’re wearing at all, of course).

Bloodborne (and From Software games in general) do have some pitfalls regarding the writting of female characters, but at least in the department of armor design, they’re doing an outstanding job.

Source: Bloodborne wiki. You can check the rest of the game’s armor designs there, too.

Now this is how to do gender equality in design.  Not as dreary concession to try to get a feminist cookie, not as a joke so you can try to take any stance you want at any time but as a genuine design decision from the word go.

Many people are excited about how these games are “hard but fair” but they so rarely go into just how fair they are.