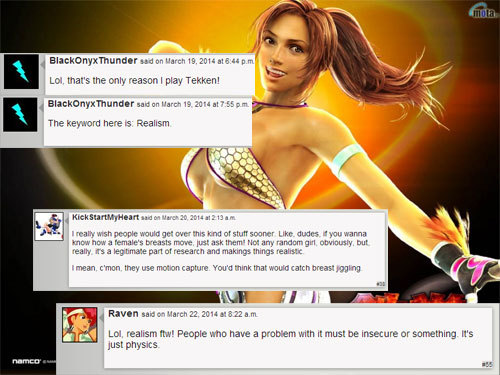 This week’s throwback: the totally scientific assessment that boobs have to excessively jiggle in fighting video games because realism… But no-one is wearing any sort of sports bra (or any bra, really) because… realism?

PS: People who reblogged it while the post still had two redundant parapgraphs: PLEASE delete and reblog the current version. This is what I get for blogging while sick.

So… this incredible encapsulation of so many things wrong with “gamer” culture actually happened.  An “esports apparel” shop somehow managed to make a dress that was more cheerleader outfit (or chair) and in order to “show respect” to “female gamers” (also known as women) and decided to brand it as a “new identity” as though none of them have worn a dress before.  Unsurprisingly, more people liked this amazing parody than the real thing.

They were naturally shocked to discover that most people consider it a good idea to involve women in the design of clothing for women (assuming you’re not aiming for your dress to end up on Game Grumps or you to beg men to give it to a “gamer girl” rather than wear it themselves).

So how did they respond to this?  Obviously, by asking for people to literally tell them let them know what “female gamers” (also known as women) wear:

That’s how they hilariously ended up with telling a competitor that they liked their designs as suggestions… apparently not realising that “female gamers” women who enjoy games can already get comfy clothes and gaming-themed clothes by people who talk to women before releasing the product.

But needless to say, they learned an important lesson about women’s clothing and considerations to make. Certainly not considerations like wanting gaming gear to comfy for hours of sitting around playing games.  They learned about marketing, specifically “delivery of tweets”:

Yes, literally all they actually learned after a full 24 hours of free feedback is that “female gamers” are women… and frankly I’m not convinced they’re going to remember that when they sober up.

Yikes indeed. There’s… so much to unpack in this and I don’t even know where to start.

I suppose what amuses me the most about this case is that Cranium Apparel somehow could not be assed to involve any women in creating that outfit, yet once called out on casual gender essentialism of selling a cheerleader dress as their exclusive piece of “female gamer” apparel… THEY NOW ASK THEIR FEMALE CRITICS to do the job of marketing team for them for free (and calling feedback they dislike “hate”).

All the while shamelessly claiming that they did their market research beforehand and none of the “few females” they asked foresaw the backlash.

This company desperately needs to replace its PR and marketing departments, preferably with an all-female staff.

It’s what she deserves

Speaking of My Hero Academia, the official stage play costume designers also agree that Momo would not dress like that if she was a real person.

And for those already furiously replying how her power set requires exposed skin, note the life-action version’s most crucial improvement: a zipper.
Wow, now she can just unzip to do the freaky shit with her chest and belly skin and just zip back after she’s done? Who would have thought? ╮(╯ل͜╰)╭

PS: We didn’t bring attention to that in our last MHA post, because the OP, @bumbleshark, already said in in their part – but most of those characters are middle-school aged. Let that sink in.

i wanted to fix some things that made me uncomfortable…also it was fun kinda redesigning these ladies from bnha cuz god damn their original suits are shit and dont make sense according to their quirks….

first off: shutup omg. yall forgetting these are fictional women written by a man. “they design their own outfits” is a dumb argument. these women dont exist and didnt decide anything. the artist/writer did. get smart.

second. the only thing different with momo is i took away the tittyshow of a 15 yr old. she still has a window on her chest and tummy but a lot of the shit she forms from her body comes from her back and limbs. there’s an inch long difference between her weird ass skirt and the shorts i gave her– i think she’ll make do.

ashido is a disaster. her quirk is secreting acids so why are the parts of her body that show as much skin covered? legs take up a lot of the body. the only other difference in her uniform is–once again— i took away the tittyshow of a 15 yr old. i literally gave her MORE skin to show.

let me wrap it up with nemuri since yer argument to this was by far the dumbest. nemuri can still rip off her clothes. she is STILL showing the same amount of skin as the original. I just changed the color and design so it looked like this bitch didnt just roll outta bed and throw over a hot topic lingerie set over a white lace onesie.

die mad about me.

Those are very awesome redesigns of some of the worst female costumes in current mainstream anime. Thank you, @bumbleshark, for saving those poor heroines.

And it’s not like My Hero Academia can’t do female costumes well. It just seems to mysteriously give up when a certain threshold of boob size is crossed ( ͠° ͟ʖ ͡°)

Well yeah, Ozzie; at a certain boob size, you gotta give them a window to breathe through. Then you strap them in with your boob sealbelt. And MHA’s got both!

See also: last time we had this @prozdvoices video on BABD

Icy got sick and would rather not be coughing into the microphone and, by extension, your ears, so we will not be streaming this week.

Hopefully, we will be back for realsies next week. Fingers crossed!