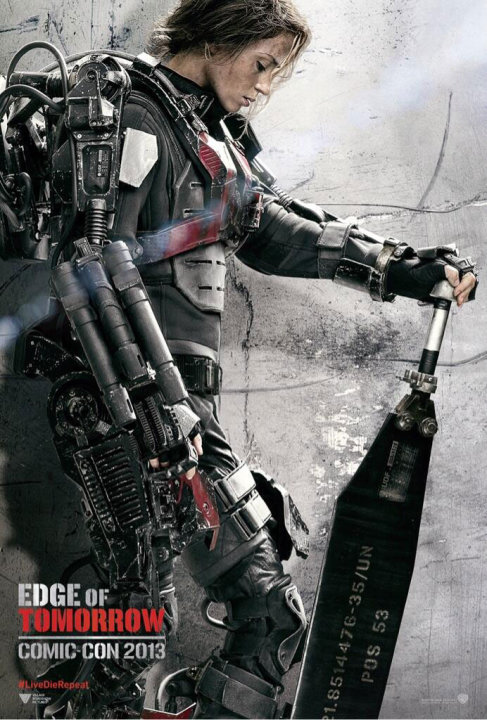 I was impressed by the Comic-Con poster for Edge of Tomorrow. It features a woman who is clearly female, but not sexually posed and fully, practically clad in sci-fi armor. I didn’t have much interest in the film before, but if it holds up to this kind of non-sexist standard, I think I’m going to have to check it out.

Ragnarok Online is a MMORPG where you can choose some job classes and level them up. I am actually not a player but this game is pretty popular in my country. Posters of this game is everywhere and I admire the style. This game features really good female outfit but the majority still falls into the sexualized category especially when you compare it to men. This is a sample: A novice can start as a swordsman. Decent armor for the girl, feminine but tough. Equality ftw Crusaders looking badass! One of the steps you can choose in the job tree. True warriors of the church! Yes equality for brothers and sisters! And… then the Crusaders turn to Paladins. Aww look at how the mighty warrior discovered the truth that mini skirts are more functional and you don’t have to protect your belly. The highest class… And from a Swordsman to a Holy Crusader to a Paladin we get the Royal Guard and… nuff said.

Man: leather clothes and boots -> more protection and boots until the highest class

All images are official art and can be found in the sites below. The art style changed over the decade hence the inconsistency.

Poor girls had to donate most of their clothes in exchange for better weapons and shields. Now they have to run around in their underwear! ):

Mod edit: As HohenheimOL observes, not only the costumes change for worse, the illustrated character’s attitude too!

[There’s a] jarring shift in body language between the first and second half. Hell, the characters on both genders look completely different; they start out looking rough, gritty, and battle ready. Come the second half, they look like generic animu “action” protagonists.